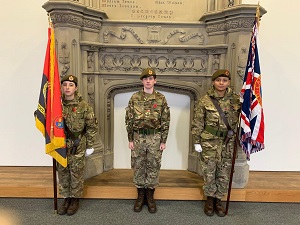 This year the CCF extended its role in the national Act of Remembrance, taking part in three events across the city. On Saturday, they played a key part in the Anglican Cathedral's performance of Jenkins' 'The Armed Man: A Mass for Peace'. The director of music, Stephen Manning, was full of praise for their efforts reporting, "We have received countless messages of congratulations which make particular reference to the role the cadets played. The general consensus has been around remarking on how well turned out they were, how smartly and accurately they went about proceedings, and how this greatly contributed to the theme of the overall evening." The recently reformed Corps of Drums once again stole the show as they filled the Anglican with the sounds of their beating.

On Sunday, hundreds of our cadets marched, sang, spoke, drummed, and stood in respectful silence as they took part in a parade and service of remembrance. Once again, they were universally praised for their appearance, hard work, and degree of respect they demonstrated through their words and deeds. Finally, Monday saw a small banner party accompany the Principal to the old Collegiate building on Shaw street where they continued a long running tradition of joining members if the Collegiate Old Boys Association in an Act of Remembrance there.

It was moving to hear the comments from members of the armed forces and wider public who encountered our cadets over the weekend, and indeed those who saw them training for their events.