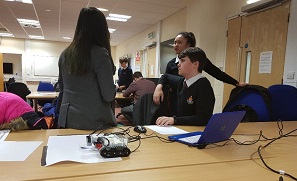 Liverpool College was awarded Third place in the NW Science and Technology National competition this week. Emily T and Liam D were awarded a trophy from the Lord Mayor of Manchester for their superb accomplishment, beating thousands of students who had taken part in the competition.

When we arrived at the venue, a professor from Manchester University gave an introductory talk on the history of robotics and what technology is being pioneered at the university. The pupils then formed a team with two from another school to take part in a computer programming challenge using Lego mindstorms Robotics. The teams had to program a robot to navigate a maze and react in certain ways when it came to a wall or different colours. This tested their perseverance skills as it required a lot of checking to see if the robot was performing the correct task. In the previous seven years of the challenge only two teams had ever made it successfully around the maze; this year four did!

After the robot challenge, the students had to give a short presentation on what they had learnt and where they felt the future of robotics lay. The day concluded with an award ceremony with the trophy presentations awarded by Lord Mayor of Manchester. A massive well done to Emily and Liam for their superb accomplishment.