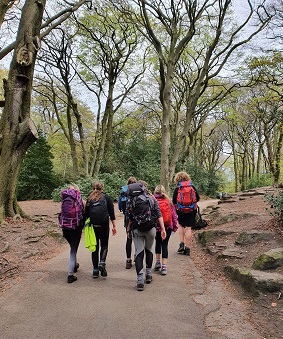 D of E With A Difference

Over the weekend, around 70 Y10 pupils completed their Bronze Duke of Edinburgh expedition. As with a great deal of the “new normal”, this expedition was unlike those of years gone by, as camping was not allowed and the routes had to be in the Liverpool region. Despite this, the pupils embraced the challenge with gusto and unquestionably embodied the spirit of the College and the Award as they slogged through some of Liverpool’s 2,500 acres of parks and open spaces.

While overnight camping is still not allowed outside of households, the participants were still expected to demonstrate their campcraft skills, so tents were pitched in the Prep playing fields and their dinners were dutifully cooked and eaten (with some looking more appetising that others!). Once they had satisfied their assessors that they had met the requirements for the day, they were debriefed and sent home.

On returning bright and early the next morning, participants again cooked and ate a hot meal before commencing their second day of the expedition under Liverpool’s blue suburban skies. Along the way they were quizzed by their supervisors on their navigation and knowledge, with a bit of coaching given as they went. As groups demonstrated their competence and responsibility, their assessors and supervisors drifted further and further behind, allowing them their independence and an opportunity to demonstrate that they had fulfilled the conditions of the Duke of Edinburgh Award. And they were never far from watchful eyes, as members of the public were always keen to tell staff their impressions, which were overwhelmingly positive. While making a pickup I was told by complete strangers that our pupils were “incredible” and they had picked up every bit of litter to take away with them. You should be very proud of how they have represented the College, the CCF, the DofE, and their generation.

Having been involved in the award for over a decade, it never ceases to amaze me how our pupils rise to a challenge. This cohort have certainly not disappointed, but have instead shown incredible resilience and positivity; universally seizing the opportunity and creating adventure despite the limitations placed on them by COVID. While they have all achieved above and beyond what we might have hoped and expected, I love that some went beyond even this and slept in tents in their gardens, truly making the most of it. I am proud of their accomplishment and very much look forward to continuing their adventure with Silver and Gold in the coming years.