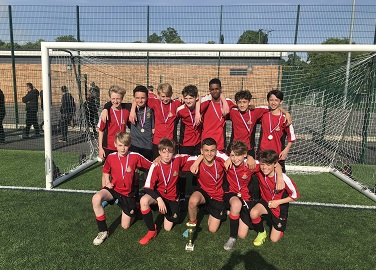 On Friday evening, a packed Simpson's Playing Field saw Liverpool College Under 13s take to the field to play a talented Cardinal Heenan side in the Liverpool Secondary Schools Football Cup Final. The sun shone down as the match kicked off with great excitement from watching families. The first half saw the College having lots of possession and several chances through talented captain Erdis R, and despite those chances the half time score line remained goalless. The second half started brightly for Cardinal Heenan and a lot of possession saw the game's biggest chance when Cardinal Heenan from a goal mouth scramble hit the post. This sparked the College back into life it was that pupil again Erdis R, who from outside the area drilled the ball into the bottom left-hand corner and take a 1-0 lead. This goal saw the College well in control and from a corner Khalil M almost made it 2-0 when he saw his header clip the top of the crossbar. Back came Cardinal Heenan and from a defensive mistake in the College backline the match was now 1-1. This saw Cardinal Heenan with their tails up and moments later a long ball downfield saw them take a 2-1 lead. There was seven minutes remaining when just outside the penalty area College Captain Erdis R was there again to once again level up the game at 2-2. It was now the turn of the College to apply some pressure and from a free kick from Ben M, up from the back stepped Hayden M to bullet a header down on the ground and into the corner of the net and put the College 3-2 into the lead. Despite late pressure from Cardinal Heenan and a flurry of corners the whistle blew, and Liverpool College were crowned Liverpool U13s Cup Winners. Many congratulations!!