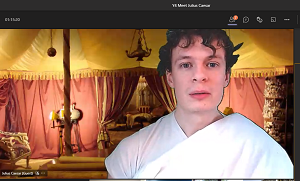 Saluto! On Tuesday, as part of the term’s history topic, Julius Caesar joined Y4 - live! In full Roman dress, straight from Caesar’s Palace in Rome (the beating heart of the Roman Empire) Julius joined the pupils to share with them some stories from his past and how his childhood experiences shaped him into a powerful leader. He talked about Roman culture and the things we still have to thank him for today such as the road systems, toilet plumbing, aqueducts, our calendar, currency, language and even fast food! As ruler of Rome, Julius Caesar won many battles and helped his huge Empire grow. After being given time to research all about Julius Caesar, the pupils were also given an opportunity to ask the Emperor questions about his life and about life in Roman times. Even through lockdown, history can still be brought to life!