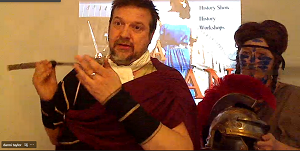 To fit in with their history topic, The Romans, Year 3 enjoyed an incredible live history show this week which taught them all about different aspects of life during the Roman period. Through the magic of technology, they travel to Ancient Rome to learn about the origins of the Roman empire and visited famous buildings such as the Colosseum and Circus Maximus. They even visited a Roman latrine. A highlight of the show was meeting a Roman Centurion, who explained about weapons/tactics/armour and the invasion of Roman Britain. To illustrate the importance of women in Roman times, they also met Boudica – an incredibly influential Roman figure who began the uprising against the Roman occupation. After the incredibly fun and informative show, the students were then given an opportunity to ask questions directly to the historical figures in a ‘History Hot Seat’.